A TALE OF SIX GAMERS: A KINGS OF WAR BLOG 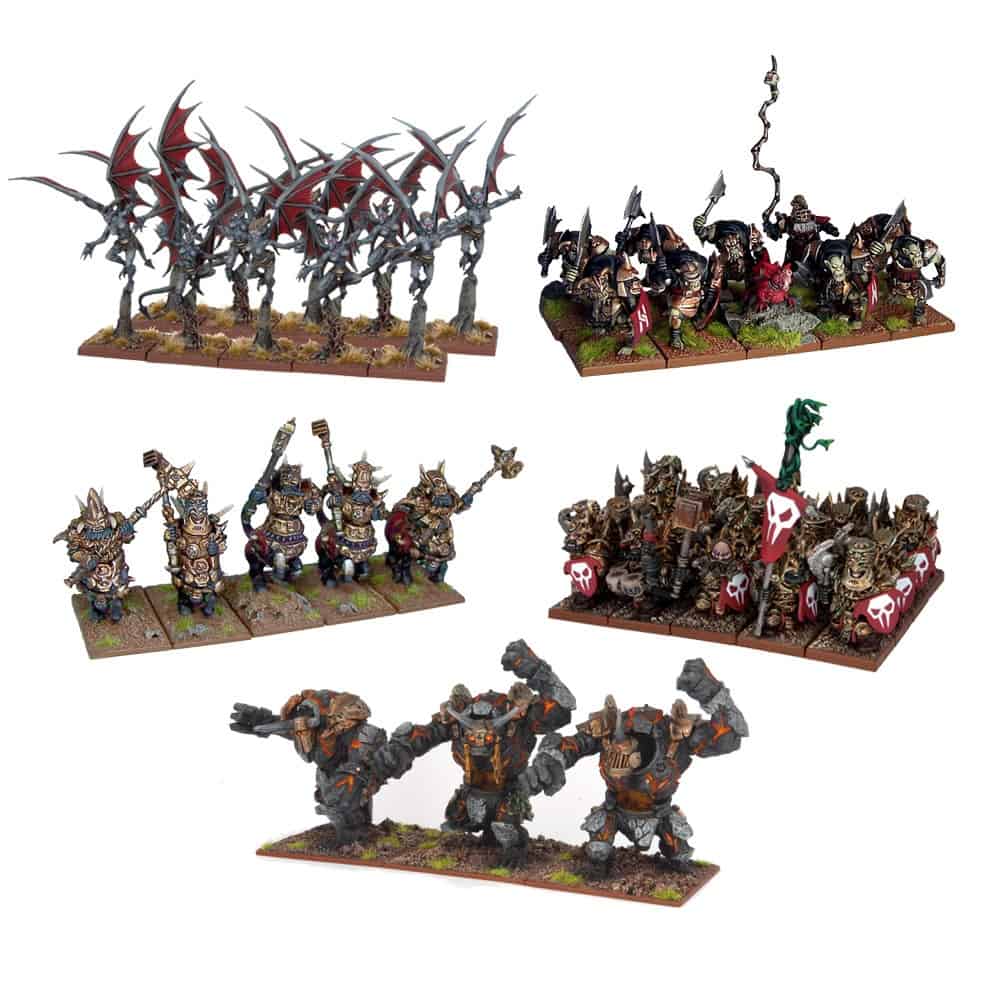 I’m excited to be involved in a Tale of Six Gamers where the six of us will be building a army starter set from Mantic’s Kings of War with the point value of 800 pts.

Back when the first Dwarf Kings Hold came out I picked up the old dwarves vs undead box as well and really loved the original rules for Kings of War. It reminded me of everything I loved about Rick Priestley’s Warmaster. I also got in on the kickstarter for the original hard back rules and dove in with a mega abyssal dwarf army. So for my army in this little shindig I chose Abyssal Dwarves. Some of my models are the original versions so they may look a little different than those on the website. I’ve never been into rank and file combat besides Warmaster so fantasy games never really appealed to me but evil dwarf models always caught my eye over the years. When Mantic released theirs I decided that I was going to get into 28mm fantasy mass combat. The other appeal was that they were evil and the simple way that allies work in KoW makes it so I can get all the other models I think are cool and get them on the table as time goes on. From the first kickstarter I have pounds of models to get done and these guys really excited me. This will be a the first time I do evil dwarves or a 28mm fanstasy themed army so it should be very different than the sci-fi games I’ve been into for decades.

The starting point for all this is the basic units from the starter army box. Since it feels like it is a good flexible force with units I can always find a use for I’m going to stick pretty close to the pictured force from the website. My plan is to make a stone themed army so I’m going to try to have the palette look similar to rock. Maybe vary the type of stone that creatures changes into based on race. I’m not 100% sure on the color yet but all of them will have glowing eyes and mouths.

The fluff for the force I’m building is that it is lead by a Medusa esque necromancer. The Abyssal Dwarves in their quest for gold released this ancient being from her frozen caldera prison in the Sentinel mountains. She had been imprisoned by the wicked ones themselves eons ago since she is a forbidden half breed, some say maybe created or sired by Oskan himself. Once she was accidentally freed of her silent prison her horrific powers were set loose on the greedy abyssal dwarves. Legions of them fell into her sway after gazing on her and being instantly petrified. After turning beings to stone she re-animates them with her inherited dark powers to use them to do her bidding. The forces of Tragar scramble to find a way to stop her as she throws their own twisted brethren against the defenses of the twin cities. So hopefully her dark plague will spread across the lands and I’ll have a excuse to paint up all different models in my stone theme. I’ll also need to come up with a name and model for my serpent queen of the dark dwarves.

The base box point value is about 250 points below what we are all shooting for at 800pts. Due to the model count of the base box multi-basing at 60 percent still will not get me a upgrade or a extra unit so I’ll have to use some artifacts. Also by dipping into my kickstarter for one more lesser obsidian golem I’m able to meet the 60% requirement and get two regiments with only 4 models. It also starts me down my rock themed army. With some upgrades this is what I have.

It is a fairly small force but with my artifacts they are a bit beefier and as my model selection grows I can drop the artifacts and get more units on the table.

Next time I’ll be well into assembly and some test painted models. But for now here is my pile. Also something I tend to do when starting a project I picked up from a arcane paintworks masterclass is a color sketch. I use photoshop often by just taking a quick pic of the model then doing some color overlay I can quickly get a idea of how the colors will work together. If you don’t have the fancy software just print out a image in black and white from the website than paint right over it with your test palette. You can run through a pile of test ideas in no time with little to no cost.